IP Protection and Enforcement a Boone for Innovation

IP Protection and Enforcement a Boone for Innovation

Bravo for the United States!

The U.S. Chamber of Commerce’s Global Innovation Policy Center* (GIPC) released its International IP Index, on February 7, 2019. This index assesses the intellectual property environments in 50 world economies. The United States has achieved the top overall ranking as the strongest intellectual property regime in the world—once again. That is great news for inventors seeking patents.

The index benchmarks a number of elements, including patent rights, commercialization of IP assets and security. In patent rights, the U.S. moved from its twelfth-place ranking in 2018 to a tie for second place this year. In the report released by GIPC, they concluded that the United States’ improved ranking in patent rights was a result of reforms introduced by the U.S. Patent and Trademark Office that are expected to reduce unpredictability in the nation’s patent opposition system. The reforms include:

Over the last year, intellectual property has become a much more important topic in international affairs. IP issues have taken center stage in the ongoing trade dispute between the U.S. and China. IP issues have also played a major role in the negotiations leading up to the United States-Mexico-Canada Agreement which was signed by in November 2018.

In a statement from Innovation Alliance Executive Director, Brian Pomper, he gave much of the credit to the new Director of U.S. Patents and Trademarks, Andrei Iancu.

“Since he assumed office last year, Director Iancu has been focused on using his administrative powers to improve the predictability and reliability of the U.S. patent system. For example, to help address the confusion over Section 101 and what can and cannot be patented, the USPTO has issued new guidance to clarify the law for inventors. And to help restore balance to the agency’s Patent Trial and Appeal Board (PTAB) process, the USPTO has finalized a rule requiring the PTAB to use the same standard for considering patent claims as is used in federal courts, to prevent inconsistent results when the same patent is reviewed in different forums. Most importantly, Director Iancu has used his position to champion the brilliance of American inventors and the critical role our patent system plays in promoting their innovation.” 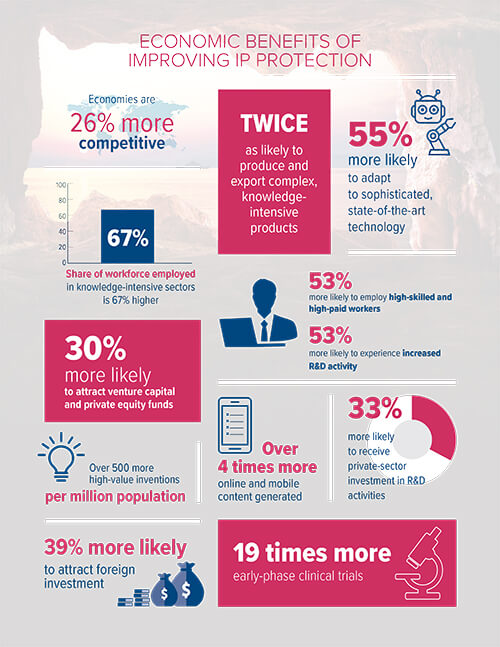 As you can see, there are many economic benefits to improving IP security. They include:

In short, the lives of billions of people have been transformed through innovation and creativity supercharged by advanced intellectual property systems, which provide a legal framework of rights and responsibilities. As governments embraces robust IP protection and enforcement, they empower the current and next generation of innovators. More inventions = more inventor’s award patents issued.